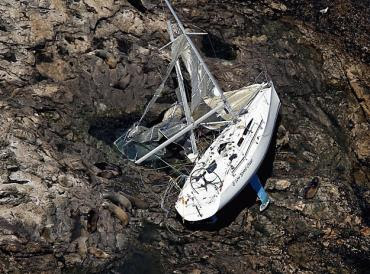 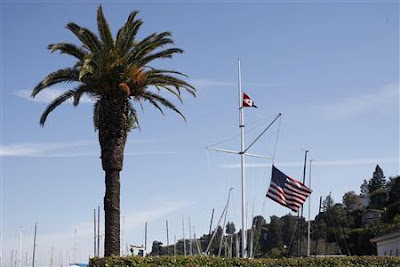 Search halted for 4 missing after California yacht race
By Emmett Berg
SAN FRANCISCO | Mon Apr 16, 2012 2:05am EDT
(Reuters) - Rescuers halted a search on Sunday for four sailors swept overboard after powerful waves battered their boat during a yacht race, tossing it into rocks around islands off San Francisco, officials said.
The body of one sailor was recovered and the suspension of rescue efforts brought the presumed death toll from Saturday's accident to five.
"An air and sea search was suspended indefinitely around sundown and we will not go back tomorrow," U.S. Coast Guard spokesman Caleb Critchfield said.
"We kept searching 12 hours past what we consider the survivability window. We extend our deepest sympathy and our hearts go out to the family and friends of the victims," he added.
The vessel Low Speed Chase, a 38-foot (11.5-meter) racing and cruising sailboat with a crew of eight, was one of 49 yachts competing on Saturday in a race around South Farallon Island, part of a rugged, sparsely populated chain offshore from San Francisco.
Officials said trouble began as the vessel rounded South Farallon Island on Saturday afternoon. A large wave initially swept four crew members into the ocean and when those remaining aboard tried to turn the craft around, another wave pushed the boat onto rocks, where it foundered. Local media said the second wave tossed three more people into the water.
Air units from the Coast Guard and California Air National Guard lifted off after receiving an emergency transmission from a satellite beacon on the Low Speed Chase, as well as a mayday radio call from a nearby yacht, officials said.
The accident came two weeks after a monster wave smashed into an Australian yacht taking part in a round-the-world race. Four crew members were hurt in that accident, which took place 400 nautical miles off the California coast, and the Coast Guard had to be called in to help. No one was killed.
THREE RESCUED
Shortly after Saturday's accident, helicopter crews quickly used litter baskets and motorized winches to rescue three sailors, said Levi Read, a U.S. Coast Guard spokesman.
The rescuers also recovered the body of Marc Kasanin, 46, of Belvedere, California, who was identified late on Sunday in a release from the San Francisco Yacht Club, where the Low Speed Chase was based.
Coast Guard and Air National Guard aircraft and ships blanketed a search area measuring 15 by 30 miles to no avail.
According to the yacht club, the missing California sailors were Alexis Busch of Larkspur; Alan Cahill of Tiburon; Jordan Fromm, 25, of Kentville; and an additional crew member whose identity was being withheld because his family had yet to be notified.
The Farallones Full Crews Race was first held in 1907, and the accident was a major blow to the 1,400-member San Francisco Yacht Club, known as the oldest yachting club on the West Coast. The club, founded in 1869, held a private vigil on Sunday.
Read had earlier said the prospects for surviving frigid ocean waters or holding onto the rocky shoals and cliffs of the Farallones depended on the missing sailors' physical fitness, size and clothing.
"The people who were rescued had on cold-weather gear and inflatable life vests," he said.
Ed Lynch, the yacht club's director, said the three rescued sailors were "all pretty shaken up" and taken to San Francisco General Hospital. Two were treated and released on Saturday and one remained hospitalized on Sunday with a fractured leg.
"This was an experienced crew who raced together often," Lynch said. "The sailing community is tight-knit, and this is being felt around the world. This is just a terrible tragedy for everyone."
(Editing by Cynthia Johnston)
Postado por A Metade Sul às 02:48 2 comentários: